One of the major religions of Bangalore is Hinduism. Check out more on the religion of Bengalooru, India.
Bangalore: Culture : Bangalore Religions 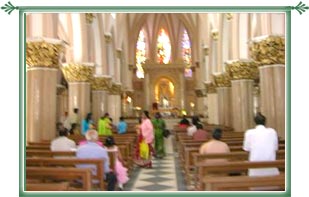 One of the major religions of Bangalore is Hinduism. Apart from that, a number of other religions are also practiced in the city, although the proportion is not too large. However, with time, and because of the large influx of working professionals from other parts of India as well as abroad, Bangalore is becoming like a melting pot of various religions. Read on to know more about the religion in Bengalooru, India.

Hinduism
The most widely prevalent religion in Bangalore is Hinduism. A majority of the population in the city practices this religion.

Sikhism
Founded by Guru Nanak Dev, Sikhism has now spread to a large number of countries in the world. It is practiced in Bangalore also.

Islam
Practiced by the Muslims, Islam is followed by the people in Bangalore also. However, their number is not quite large.

Christianity
One of the major religions of the world, Christianity is also practiced in the city of Bangalore, by a significant proportion of the population.

Others
The other religions practiced in the city of Bangalore include Buddhism, Jainism and Zoroastrianism. However, these religions are practiced by a very small percentage of the total population.