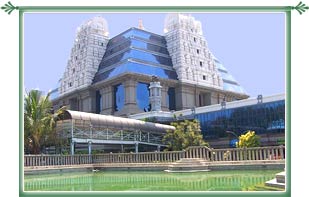 Bangalore city boasts of a number of religious places, ranging from mosques to churches. Not only are these religious places revered amongst the devotees, but also significant from architecture point of view. Given below is more information about the major religious places in Bangalore. Check out the places of worship in Bengalooru, India.

Banashankari Temple
The Banashankari temple of Bangalore dates back to the year 1915. It was founded by Somanna Shetty, a devotee of Banashankari Amma. He brought a deity of Amma from Badami, in Bijapur district, and installed it inside the temple.

Bull Temple
The Bull temple of Bangalore is dedicated to Nandi Bull, the vahana (vehicle) of Lord Shiva. Situated in Basavanagudi, this temple has been built in the Dravidian style of architecture. Kempe Gowda, the founder of Bangalore, got the Bull temple built during his time.

Iskcon Temple
Just like all other Iskcon temples, Bangalore Iskcon temple is also dedicated to Lord Krishna. It is situated to the west of the Chord Road, on a seven-acre hillock, known as the 'Hare Krishna Hill'. The Iskcon temple of Bangalore was built to commemorate the birth centenary of the founder of ISKCON, Sri Prabhupada.

Jumma Masjid
The oldest mosque of Bangalore, Jumma Masjid was earlier known as Sangian Jamia Masjid. Situated in the busy K.R. Market area, the mosque is renowned for its beautiful architecture. The prayer hall of the Jumma Masjid stands on an elevated ground and stands adorned with soaring, ornate granite pillars.

St. Mary's Basilica
St. Mary's Basilica is situated opposite the Russel Market Square in Shivajinagar, Bangalore. Initially, the basilica was built as a small chapel by Abbe Dubois, in the year 1818. However, later, Reverend L.E. Kleiner got it converted into an ornate Gothic style church.

St. Andrew's Kirk
St. Andrews Kirk, situated on the Cubbon Road, holds the distinction of being the only Scottish Kirk in Bangalore. The kirk is adorned with stained glass windows, which illustrate Lord Jesus and his eight apostles. The other attractions of St. Andrew's Kirk comprise of a pipe organ, installed in 1881, and the polished brass plaques ornamenting the walls.