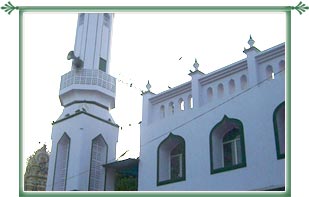 The oldest mosque of Bangalore, Jumma Masjid was earlier known as Sangian Jamia Masjid. Situated in the busy K.R. Market area, the mosque is renowned for its beautiful architecture. The prayer hall of the Jumma Masjid stands on an elevated ground and stands adorned with soaring, ornate granite pillars. It is believed that the mosque was built somewhere around 1790. The brick and mortar structure of the masjid has an impressive facade, embellished with elaborate jali-work and floral motifs. Read on to know more about the Jumma Masjid of Bangalore, India.

There are magnificent twin minarets inside the masjid that stretch upto the spherical domes above the balconies. These minarets have been ornamented with a graceful assembly of a large number of pigeonholes. A few years back, a delicate pattern, previously concealed under successive layers of white paint, was discovered inside the Jumma Masjid of Bangalore. The festive season sees the minars as well as the entire edifice of the masjid getting beautifully decorated with lights, adding to its beauty.