Bangalore fairs and festivals reflect the cultural side of the city. Check out major festivals & fairs of Bengalooru, India.
Bangalore: Bangalore Fairs and Festivals 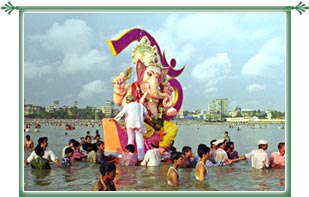 Karaga Festival
The Karaga festival is celebrated in the month of March-April. Karaga is the name given to an earthen pot, which symbolizes Shakti. Devotees place a karaga on their heads and join in the procession taken out at night. The procession comes to an end at the Sampangi tank, where all the pots are immersed in water. It is believed that balancing the pot on the head is like a test through which the strength of a person's character is tested. In the main temple procession, a priest, dressed up as woman, undertakes the same procedure.

Kadalekaye Parishe (Peanut Festival)
Kadalekaye Parishe, also known as Peanut festival, falls in the month of November. It is held in order to celebrate the first groundnut crop of the year. As a part of the celebrations, the farmers of the city visit the Bull temple to seek blessings of God.

Dussehra
The festival of Dussehra is celebrated all over the country, including the state of Karnataka. It falls in the month of October-November and marks the victory of good over evil.

Diwali
Diwali festival is celebrated in the month of October-November. On this day, people worship Goddess Lakshmi and Lord Ganesha and seek blessings of prosperity.

Mahashivratri
Mahashivratri is the festival dedicated to Lord Shiva. It falls in the Hindu month of Magha and is celebrated throughout India. On this day, devotees visit the nearest Lord Shiva temple and offer Panchamrit (mixture of five sacred elements), fruits and sacred leaves to the Shiva Lingam.

Ugadi
Ugadi festival marks the beginning of the Kannad New Year, along with the advent of spring season. It falls in the second half of March or first half of April and is mainly devoted to Lord Brahma. The day begins with a ritual bath, early in the morning, and comes to an end with prayers that continue late into the night. It is believed that Lord Brahma created the world on this day only. Another popular belief related to Ugadi is that on this day, Lord Vishnu took an incarnation in the form of Matsya.

Varamahalakshmi
Varamahalakshmi or the Lakshmi Puja is celebrated in the month of August, throughout the state of Karnataka. The Puja dates back to the Vedic age and is mainly performed by the married females. They offer garlands of cash, jewelry and other valuables to the Goddess and pray for the prosperity and happiness of their husband and their family. After the performance of the puja, they offer vermilion (kum-kum) to at least five other married ladies.