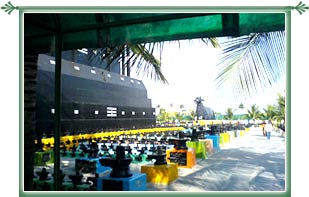 Kolar Gold Fields are believed to be the second deepest gold mines in the world. Situated at a distance of approximately 120 km from Bangalore, these mines were closed down in the year 2003 because of reducing deposits and hiking costs. However, once Kolar Gold Fields were counted amongst the major gold mines in India. One has to take permission from the Secretary, Kolar Gold Mining Undertaking, K.G.F., for visiting the site. Read on to know more about the Kolar Gold Mines near Bangalore, India…

The Legend
There is a very interesting legend associated with the Kolar Gold Fields, near Bangalore. It is said that Lord Rama, while on the vanavasa with his wife Sita and brother Lakshmana, set up His hut in the present day Avani village, about 10 miles from the gold fields. One day Ravana's sister, Surpnakha, first asked Lord Rama and then Lakshmana to marry her. In order to ward her off, Lakshmana cut off her nose.

To take revenge for this, Ravana sent Maricha in the disguise of a golden deer to lure Lord Rama and Lakshmana. In their absence, he kidnapped Sita. Lord Rama finally managed to kill the golden deer and as per the legend, the remains of the deer spread over a large area. These remains are attributed to be the reason behind the presence of gold in Kolar Gold Mines.