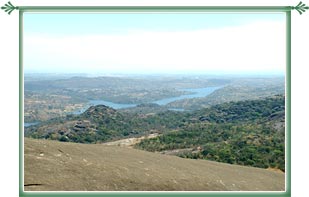 Savandurga is the name given to the hills situated at a distance of around 60 km to the west of Bangalore. Rising to an altitude of 1226 m above the sea level, these hills are considered to be one of the largest monolith hills in India. Savandurga Hills form a part of the Deccan plateau and comprise of peninsular gneiss, laterites, basic dykes and granites. They consist of two hills, namely Karigudda (black hill) and Billigudda (white hill). In the following lines, we have provided more information about Savandurga Hills near Bangalore, India.

Savandurga Hills serve as the base for pilgrims who come to visit the Savandi Veerabhadreshwara Swamy temple and Narasimha Swamy temple, situated at the base of the hills. These hills are also quite popular amongst rock-climbers, cave-explorers and adventurers. The dry deciduous forest surrounding the hills is home to the endangered Yellow-throated Bulbuls, Sloth bears, Leopards, etc. Even the flora of the Savandurga Hills is quite varied, comprising of over 59 tree and 119 shrub species.