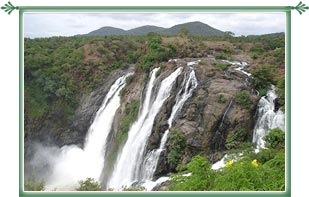 Shivanasamudra Waterfalls are situated in Mandya District, at a distance of around 120 km from Bangalore. These waterfalls are also known as Siva Samudram, literally meaning Shiva's Sea. It is here that the Cauvery River branches off into two different streams, each of them cascading down the 200 ft fall. The western stream is known as Gaganachukki, while the eastern stream is known as Bharachukki. Surrounding the waterfalls are hill forests of the Cauvery Wildlife Sanctuary. Given below is more information about Siva Samudram Waterfalls near Bangalore, India…

Gaganachukki
Gaganachukki cascades down a height of 98 m, with the maximum flow of 667,000 cubic feet per second (19,000 m³/s). Asia's first hydroelectric power station was set up at this waterfall, in the year 1905. The electricity produced here was mainly used to light up the Gold Mines of Kolar, making Kolar the first Asian city to receive electricity. The power station is situated near a dargah, from where you can have excellent views of Gaganachukki. The waterfall comprises of two porticoes, one in the west and the other in the east.

Bharachukki
The cascading edge of Bharachukki is a little wider than that of Gaganachukki. It is situated at distance of approximately one km from the Dargah. One of its sections resembles a 'U', just like the famous Niagara Falls. The waterfall has a fluid and graceful cascade along the side. There is no viewing gallery for the Bharachukki waterfall and even the flow of tourists is quite low. The currents here are quite strong and the gorge is quite deep. So, swimming is not advised at all.