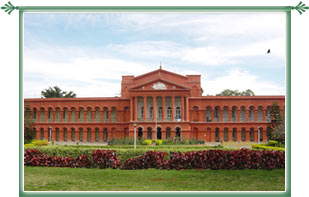 Attara Kacheri of Bangalore is a building housing the High Court. Situated opposite the Vidhana Soudha, it dates back to the year 1867. One of the major attractions of the Attara Kacheri is its Gothic Style of architecture. It is a two-storied building, built in the European classical style. Also known as the High Court Building, it serves as the perfect contrast to the white columned building of Vidhana Soudha. Read on to know more about Attara Kacheri of Bangalore, India.

Attara Kacheri of Bangalore was built under the reign of Tipu Sultan, the Emperor of Mysore. It is said that during his time, the offices of the eighteen departments of Revenue and General Secretariat expanded to quite an extent. Since the palace could not house the offices, he ordered the construction of a new building, where the offices could be relocated. He named the building as Attara Kacheri, meaning eighteen offices or departments.

There are a number of buildings worth visiting near Attara Kacheri. They comprise of the Visveswaraya Industrial and Technological Museum, Public Library, the Venkatappa Art Gallery and the Government Museum.