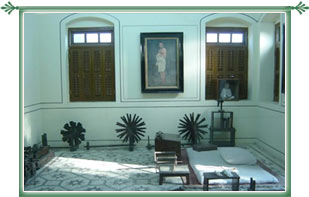 Gandhi Bhavan of Bangalore is dedicated to Mahatma Gandhi, the Father of the Nation. The Bhavan was set up with the intention of promoting the life and teachings of Gandhiji. Situated on the Kumara Krupa Road, Gandhi Bhawan was started as Gandhi Smaraka Nidhi (GSN), under the chairmanship of Dr Rajendra Prasad, the then President of India. The main attraction of the Gandhi Bhawan consists in a comprehensive picture gallery, displaying the entire life of Mahatma Gandhi.

The gallery has photographs of Mahatma Gandhi, from early childhood to the last day of his life. Apart from that, there are also Photostat copies of the letters written by him to the various personalities of his time. One can also see placards with the famous quotes of Gandhiji, hanging on the walls of the Bhavan. Today, the Gandhi Bhavan of Bangalore serves as the venue for public meetings organized on Gandhian values.