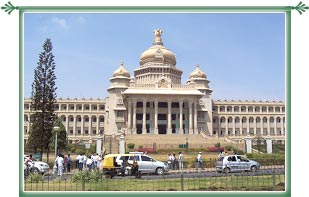 Vidhana Soudha counts amongst the most impressive as well as the most magnificent buildings in the Bangalore city of India. It is mainly famous for housing the Legislative Chambers of the state government. The three hundred rooms of Vidhan Soudha accommodate approximately twenty-two departments of the state government. The building rises to a height of almost 46 m, making it one of the most imposing structures in the city of Bangalore.

Built in the year 1956, Vidhana Soudha of Bangalore boasts of exquisite Dravidian architecture. It was built under the then chief minister of Karnataka, Mr. Kengal Hanumanthaiah, as a tribute to Indian temple architecture. The chief engineer of Vidhan Soudha, B.R. Manickam mainly made use of granite to get the edifice constructed. In the following lines, we have provided more information on the architecture of the Vidhan Soudha of Bangalore, India.

Architecture
Constructed purely out of granite and porphyry, Vidhana Soudha is adorned with four domes on its four corners. Embellishing the entrance of the buildings is the Four-headed Lion, the national symbol of India. The Cabinet room has a huge sandalwood door, which has been beautifully carved.

Vidhana Soudha of Bangalore can be accessed from all the four directions. However, the admission to the building has been restricted and one has to take prior permission before visiting its interiors. Vidhan Soudha looks breathtakingly beautiful on Sunday evenings and on public holidays, when it is floodlit. The lights are kept on from 6:00 to 8:30 in the evening. A sightseeing tour of Bangalore is incomplete without a visit to the Vidhana Soudha.